The Fire HD 10 had always been the odd one out from the Amazon Fire tablet series. It is not premium enough to justify its price tag of $230, and nor is it cheap enough to pardon its cost-effective adjustments which includes a 1280×800 pixel resolution screen, there were not many reasons to recommend the HD 10 over its cheaper and smaller models.

However, the new Fire HD 10, deserves my recommendation. The tech giant has secured the most obvious issues, which included the most principal launching of a full HD 1080p IPS display, while they also reduced the price to an attractive $150. It also features a hands-free combination of Alexa, rather than the touch-to-talk used in other Fire models.

Amazon has, however, made concessions to reach to the lower price tag. This includes the limitation of Fire OS, however, lets look at the good things first. The device has a 10.1-inch, 1920×1200 pixel IPS display which is colorful and has brilliant viewing angles. It is coated to the glass, which makes the screen more readable. The old shiny rear surface of the old Fire 10 has been replaced by a textured plastic, which makes the phone easy to grip.

The Fire HD 10 has an internal upgrade as well. It is powered by a 1.8GHz, quad-core MediaTek processor, that guarantees to be 30% more faster than the old processor used in the old Fire HD 10. It might not be as lively as the Apple or Qualcomm alternative, but it provides more than enough ability to enable Fire OS smoothly. The HD camera placed on the front and the 5MP back camera remain the same, but they are useful for video calls and light video recording, if not the photography. 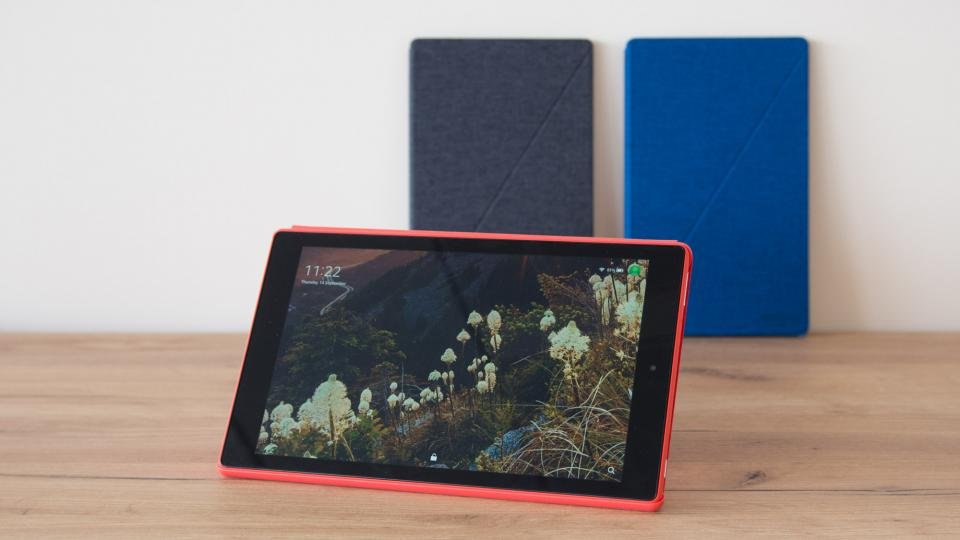 There has been a boost in the battery life, as it is claimed up to 10 hours of mixed usage, along with 2GB of memory. The base level of storage has also expanded from 16GB to 32GB, while it also allows for a microSD card for expanding device storage.

The Fire HD 10 is powered by Fire OS like all Amazon tablets, which is Amazon’s own operating system that is based on the Android by Google. The Amazon Prime account can help the user make the most out of the digital purchases through Amazon. The Amazon digital assistant, Alexa, will also be helpful, as it can do almost everything you tell it to do.

The major change in the Fire HD 10 is the hands-free Alexa, which can be enabled or disable through the notification panel. Now you can activate Alexa by saying “Hey, Alexa” rather than having to hold down the virtual home button. This tech has taken a lot of time to come into Amazon’s tablets, but this is now the easiest way to interact with Amazon’s Alexa. This means, anything which you can do with the Amazon Echo or Echo Dot, it can be done with the new Fire HD 10.

Amazon has not yet revealed whether the hands-free Alexa will be introduced on other Fire models, but taken into consideration that it brought Alexa over to the Fire 5 after it was launched with the Fire 8 and Fire 7, it can be expected to be launched on other Fire devices.

The only reason one might not want to purchase the Fire HD 10 is the applications in the Amazon App Store, which are limited from the Google Play Store.

However, with the cheap Fire HD 10, you can compensate the remaining money set aside for, e.g iPad Pro 10.5, towards an Amazon Prime, Spotify or a Netflix subscription.