Samsung Galaxy S8 or iPhone 8 – which is better?

One of the most anticipated smartphone of the year, the Iphone 8 is just around the corner, as it is to be released by Apple on September 12, in an event just three days away.

With a lot of leaks already removing the element of surprise from the new iPhone 8, it means users already have an idea of what to expect as they know the expected specification, design and features of the model.

And with that idea in mind, we can already make a comparison how the iPhone 8 is going to stack up against the mega success of 2017, the Samsung Galaxy S8.

If rumours about the iPhone 8 are correct, it will have more similarity with the S8 virtually than any previous iPhone model.

With a glass back and a metal frame, Apple has done without a home button, and has decided for a all-screen front. On the other hand, the Samsung Galaxy S8 almost also has a screen-filled display with only a small layer of bezels below and above the scren, while it also has a glass back and a metal frame. The S8 sports a curved display, while the iPhone 8 is leaked to have a flat screen.

Another one of the similarity between the two mega phones is that they are water and dust resistance. It is reported that the iPhone 8 is likely to match the Samsung Galaxy S8’s IP68 certification, which would enable it to be submerged at a depth of 1.5 meters for about 30 minutes.

It was speculated that the California-based Apple was trying to embed its scanners in the screen of the phone, but it could not. This means that it could be sported on the front or the power button. However, it is also reported that Apple might have ditched the fingerprint scanner for the 3D facial recognition tech. 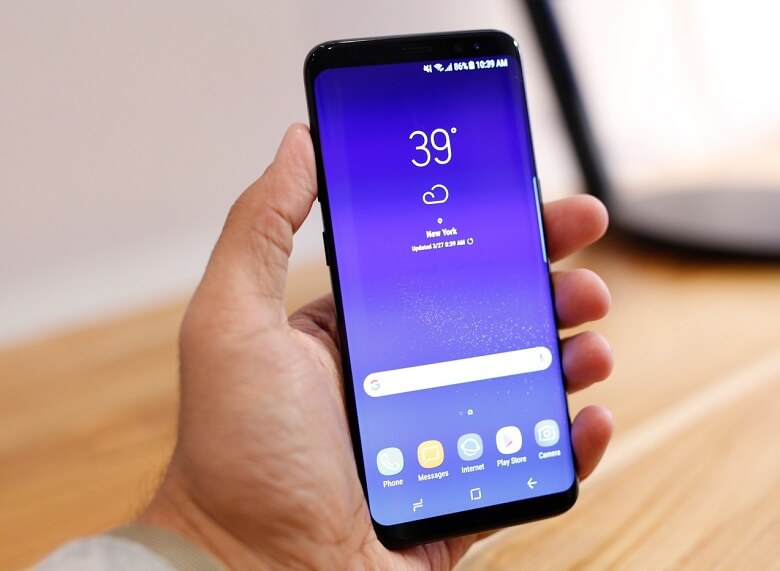 The iPhone 8 is tipped to have a quad-core one, and 3GB RAM, as it will be powered by a tiny 10nm A11 or A11 Fusion chipset. On the other hand, the S8 will have a more impressive octa-core chipset, and 4GB of RAM.

Apple is also said to be working on an artificial intelligence processor, that would boost the performance of the iPhone 8.

It is also reported that Apple is expected to introduce a smallest storage of 64GB in its model and a maximum storage size of 256GB and also 512 GB. In comparison, Samsung only has a 64GB size, but has a slot for a microSD card, which the iPhone does not.

However, the operating system is expected to be the biggest difference between the two mega stars of 2017. The iPhone 8 will run the iOS 11, while the S8 runs the Android Nougat, which could be upgraded to the Oreo version in the future.

The iPhone 8  is expected to sport a dual-lens camera, similar to the iPhone 7 Plus, and will probably be a 12MP one. It is expected to ahve an optical image stabilization on both the lenses, while it could also have the ability to recognize and manipulate the faces in the camera.

On the other hand, the Samsung Galaxy S8 only features a single 12MP camera, but its large lens and optical image stabilization enables it to take high-quality pictures. The S8 also includes a 8MP front-camera, while the iPhone 8’s front camera is tipped to continue the 7MP version from the iPhone 7.

The iPhone 8 front-camera might also carry out a 3D recognition of the face of the user. Even the S8 has a face scanning tech, but it is not as advanced as the iPhone’s.

Even though both phones are expected to be the biggest of the year, it will finally come down to the choice of the user, who has to make a move for iOS or Android to decide what is best. What can be promised is, that both are going to be few of the most successful phones in the recent years.